The Most Comprehensive Singapore Property Website Midtown Modern is a luxury residence by Guocoland, sitting right on top of Bugis MRT interchange
Most Comprehensive List To All The Latest New Upcoming Condo Launches In Singapore

Midtown Modern is a luxury residence by Guocoland, sitting right on top of Bugis MRT interchange 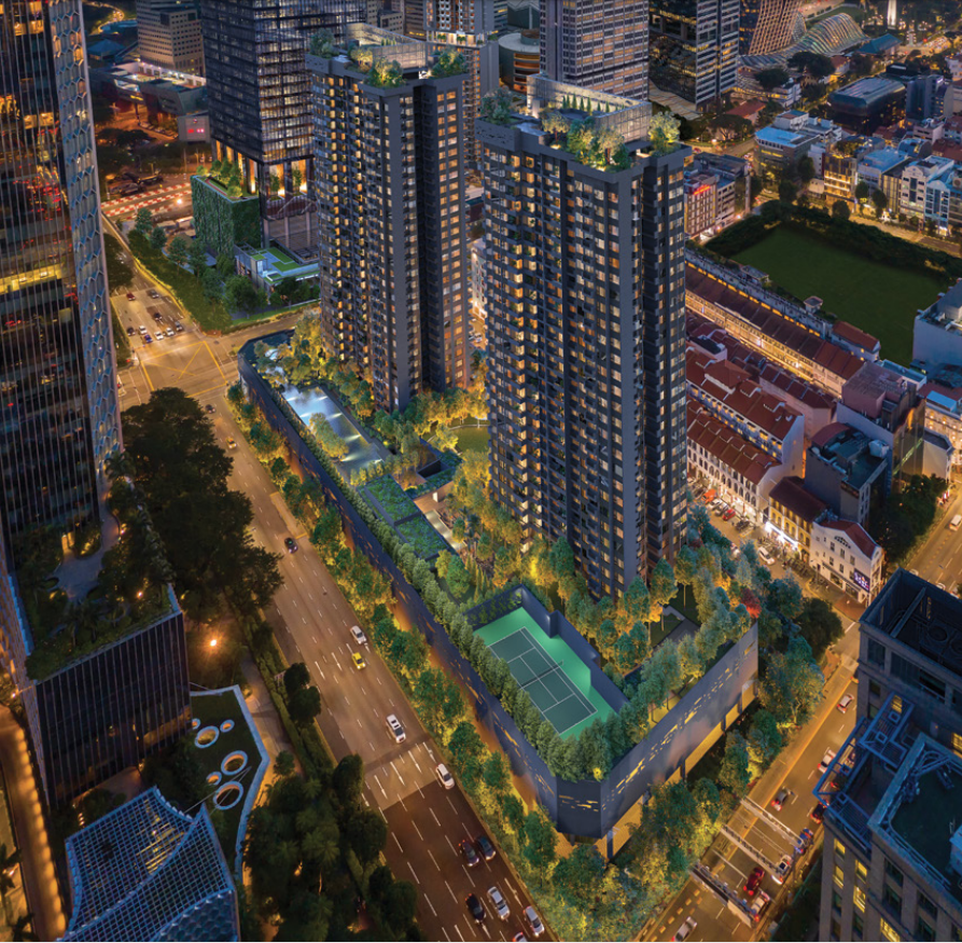 GuocoLand has unveiled plans for Guoco Midtown II, an expansion of Guoco Midtown. The mega mixed-use development along Beach Road will also come with the inclusion of a second residential project known as Midtown Modern. Located at Tan Quee Lan Street, the condominium project comprises two 30-storey towers with over 500 apartment units in a forest garden setting and a retail podium. In a release, the property developer revealed that unit types will range from one-bedroom to four bedroom units.

Acquiring a home is rarely just about the state of its four walls — location is also paramount. Once ​Midtown Modern​ is completed in 2025, the development is set to add further vibrancy to the Beach Road enclave. Situated along Tan Quee Lan Street, the luxury project will be right above Bugis MRT Interchange, offering residents seamless connectivity to the whole of Singapore.

​Midtown Modern is a luxury residence by Guocoland, sitting right on top of Bugis MRT interchange. Directly linked to amenities such as Bugis MRT, Bugis Junction, Duo Galleria, the upcoming Guoco Midtown, as well as Suntec City, Midtown Modern offers the ultimate city living like no other. 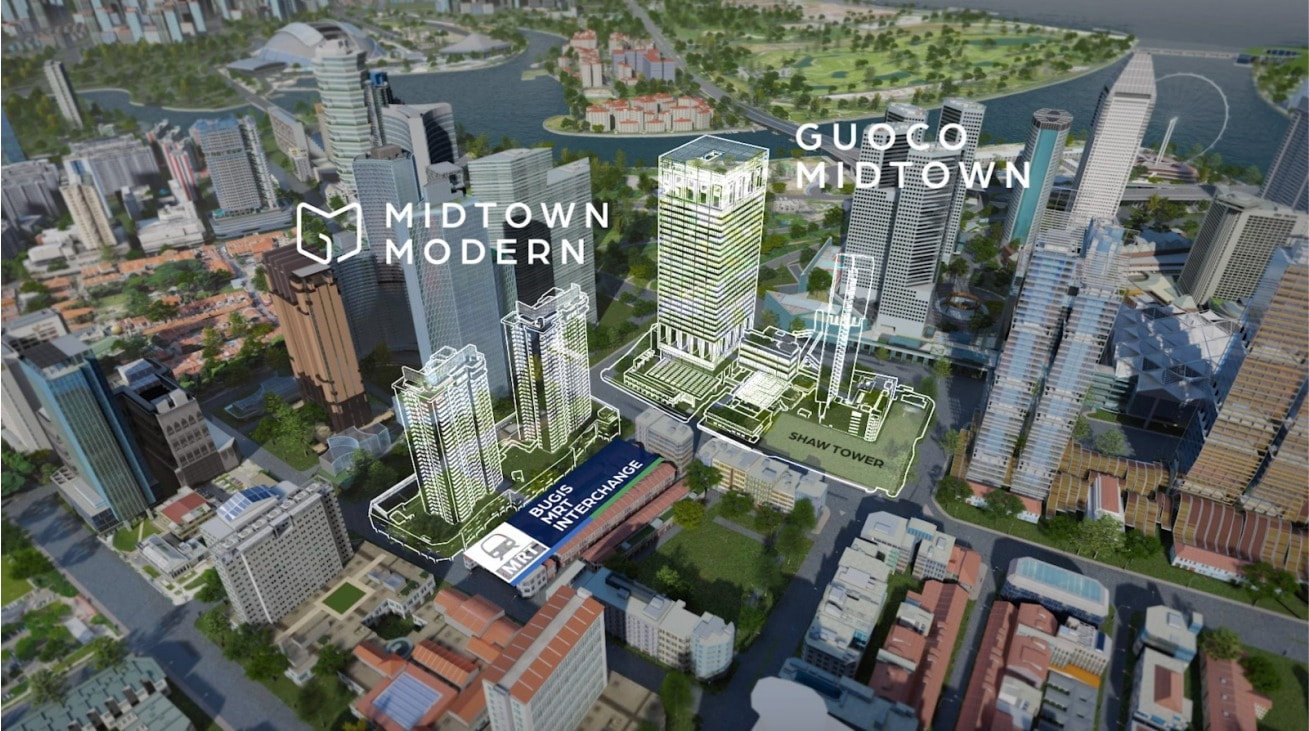 Guoco Midtown is a mixed-use development comprising premium Grade A offices, public and retail spaces, exclusive residences, and Guoco Midtown will rejuvenate the Beach Road district, redefine public spaces, enhance street life, introduce a new experience of working in Grade A offices and a new concept of luxury city living.
Midtown Modern's residents will enjoy large green spaces and a wide range of recreational facilities not usually found in Central Business District projects with residents and visitors enjoying unparalleled connectivity to two MRT lines – the East-West and Downtown Lines, and will cater to families looking for a home for a home within the CBD.

Consisting of 2 elevated 30-storey towers, Midtown Modern has a huge site area of over 124,000sqft, which is rather rare for a residential development in prime Central Business District. This make it probably the first development in this area to offer full condo facilities, with vast landscapes. Designed by ipli Architects, which also designed Martin Modern for Guocoland, Midtown Modern will have the same designed concept – a botanic garden right at your home.

The 3rd retail cluster is Midtown Square at Midtown II above Bugis interchange MRT fronting Tan Quee Lan Street. The residential part of Midtown II is Midtown Modern – a rare concept of living in a Botanical Gardens setting in the upcoming CBD in District 7.

Relax and connect with nature even if you’re working from home with lots of greenery and recreational facilities.

Midtown Modern located above Bugis MRT interchange station for the Downtown and East West Line and linked to Guoco Midtown cross the bridge linking to Shaw Towers & South Beach to either Suntec Convention City and the Esplanade MRT station on the Circle Line.

Midtown Modern offers ultimate convenience - within a five to 10 mins walk of 7 mil sqft of offices, over 3 mil sq ft of shopping and F&B spaces as well as 10 five-star hotels. For families with children in secondary or tertiary levels, being close to an MRT interchange station with access to different lines is an added convenience.

There are 20 thematic gardens and landscaped public spaces spread across Guoco Midtown and Midtown II. 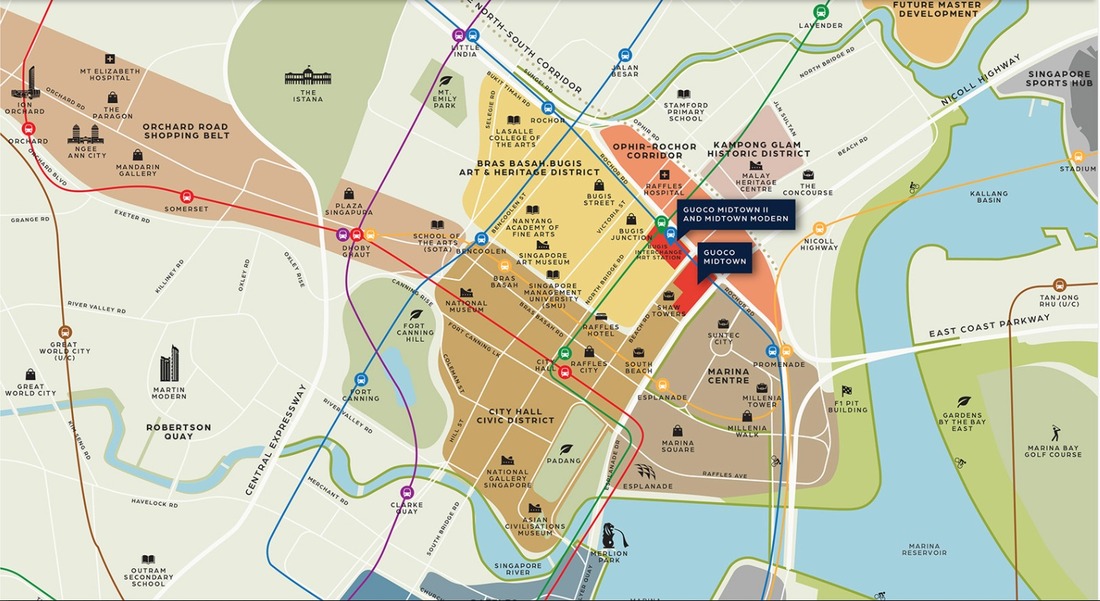 Although GuocoLand has designed Midtown Modern to house a landscape of natural greenery, future homeowners will also able to take advantage of the upcoming Bukit Timah-Rochor Green Corridor that will link three national gardens –Jurong Lake Gardens, Singapore Botanic Gardens and Gardens by the Bay – providing more recreational options to get to various parts of the island and connect with nature.
Located at the intersection of two key development corridors along Beach Road and Ophir-Rochor Road in the Central Business District, Guoco Midtown will connect the three office micromarkets of City Hall, Marina Centre and Bugis, and introduce an innovative concept for Grade A offices and re-define the way landlords partner office tenants. Served by 4 MRT lines and Nicoll Highway, as well as the North-South Expressway in the future, GuocoLand will introduce a new way of luxury city living in response to the new urbanite lifestyles which demands effortless transition between living, working and entertaining.

As part of Guoco Midtown, residents of Midtown Modern will also be able to enjoy amenities beyond the retail offerings that will grace the first level of the development. Guoco Midtown is set to be a bustling lifestyle hub. With 770,000 sq ft allocated for Grade A office spaces; 219 units at Midtown Bay; an 80,000 sq ft business and lifestyle Network Hub; three retail villages spanning some 50,000 sq ft; and landscaped gardens and public spaces that take up over 400,000 sq ft, residents at Midtown Modern will be welcomed into a larger community within the CBD.

GuocoLand describes Midtown Modern, and the larger Guoco Midtown development, as a key connector to Singapore’s three major office micromarkets: Bugis, City Hall and Marina Centre.
Through Guoco Midtown, homeowners at Midtown Modern will also enjoy direct and sheltered access to three other MRT stations: City Hall MRT Interchange station, Promenade MRT Interchange station and Esplanade MRT station, further adding to the convenience of city-living. Through a direct underground link, homeowners will be able to access developments like Duo and Bugis Junction. A continuous sheltered link will also lead residents through to establishments like Suntec City, Marina Square, and Millenia Walk, and further out to Marina Bay Sands and Gardens by the Bay through the Helix Bridge.

The upcoming North-South Corridor, which runs adjacent to Midtown Modern and Guoco Midtown, will feature the city-state’s first integrated transport corridor with cycling tracks, pedestrian paths and dedicated bus lanes. Once completed, the project, spanning 21.5km, will connect the city centre to the North region of Singapore. To top it off, the cycling track will link to the Park Connector Network and local cycling paths along the entire corridor, further enhancing accessibility and providing a recreation alternative for families in Midtown Modern. 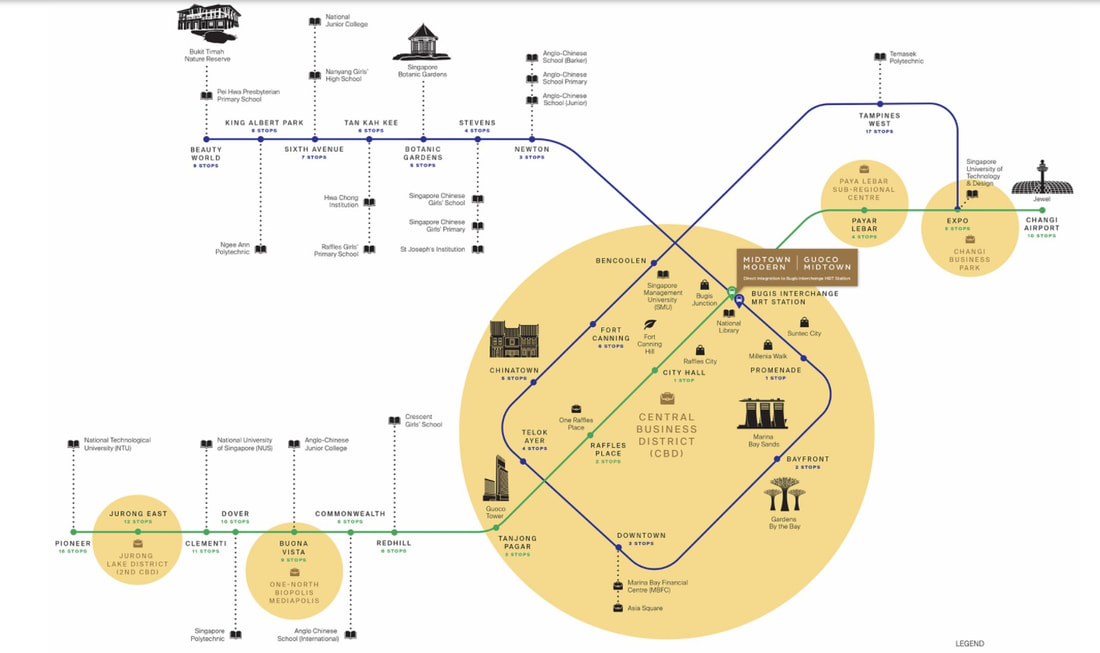 Located at the intersection of two key development corridors along Beach Road and Ophir-Rochor Road in the Central Business District, Guoco Midtown will connect the three office micromarkets of City Hall, Marina Centre and Bugis, and introduce an innovative concept for Grade A offices and re-define the way landlords partner office tenants. Served by 4 MRT lines and Nicoll Highway, as well as the North-South Expressway in the future, GuocoLand will introduce a new way of luxury city living in response to the new urbanite lifestyles which demands effortless transition between living, working and entertaining. 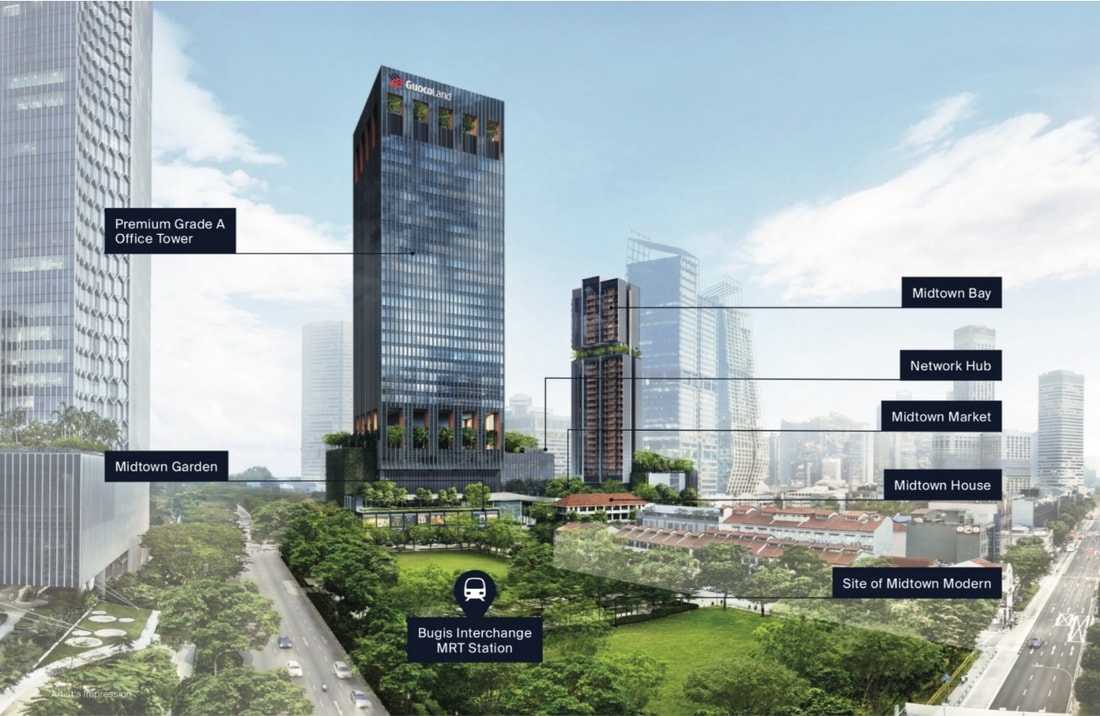 Guoco Midtown is a mixed-use development comprising premium Grade A offices, public and retail spaces, exclusive residences, and the former Beach Road Police Station which is a conserved building.

Midtown Modern - daytime aerial view of development
​For families with children, schools are also within easy reach from Midtown Modern. On the Downtown Line, Anglo-Chinese School is just three stops away at Newton, while Singapore Chinese Girls’ School and St Joseph’s Institution are four stops away at Stevens MRT. Meanwhile the East-West Line also offers a wide range of educational options: Anglo-Chinese Junior College is near Buona Vista MRT station, nine stops away, while Singapore Polytechnic is 10 stops away, in Dover. 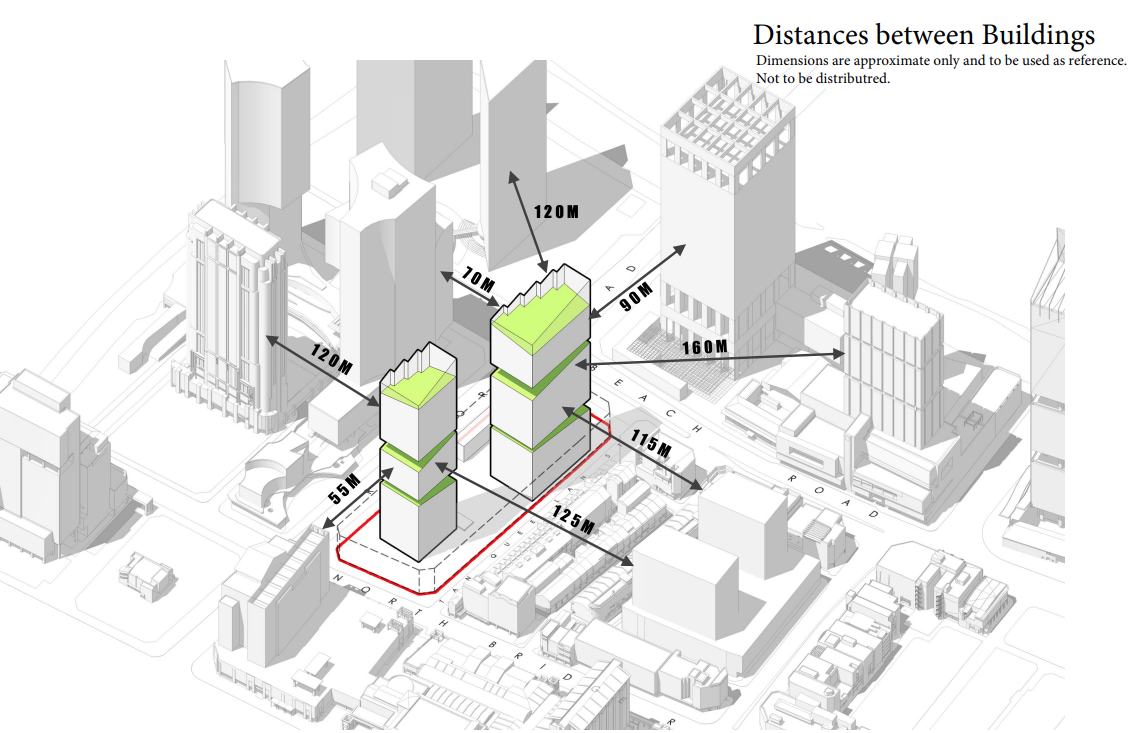 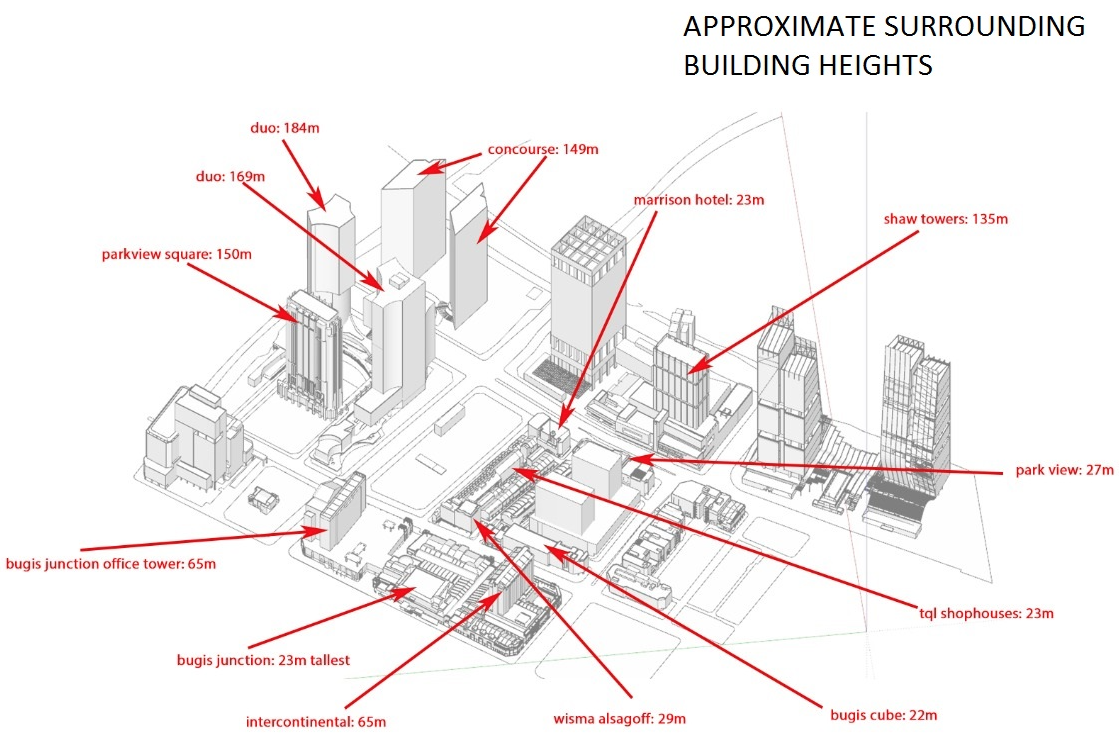 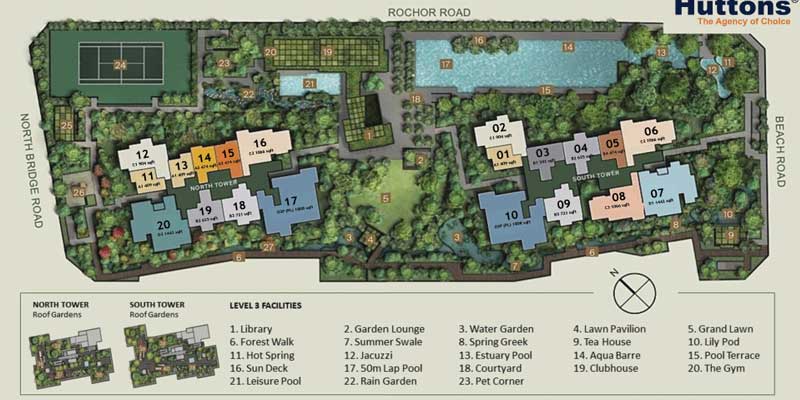 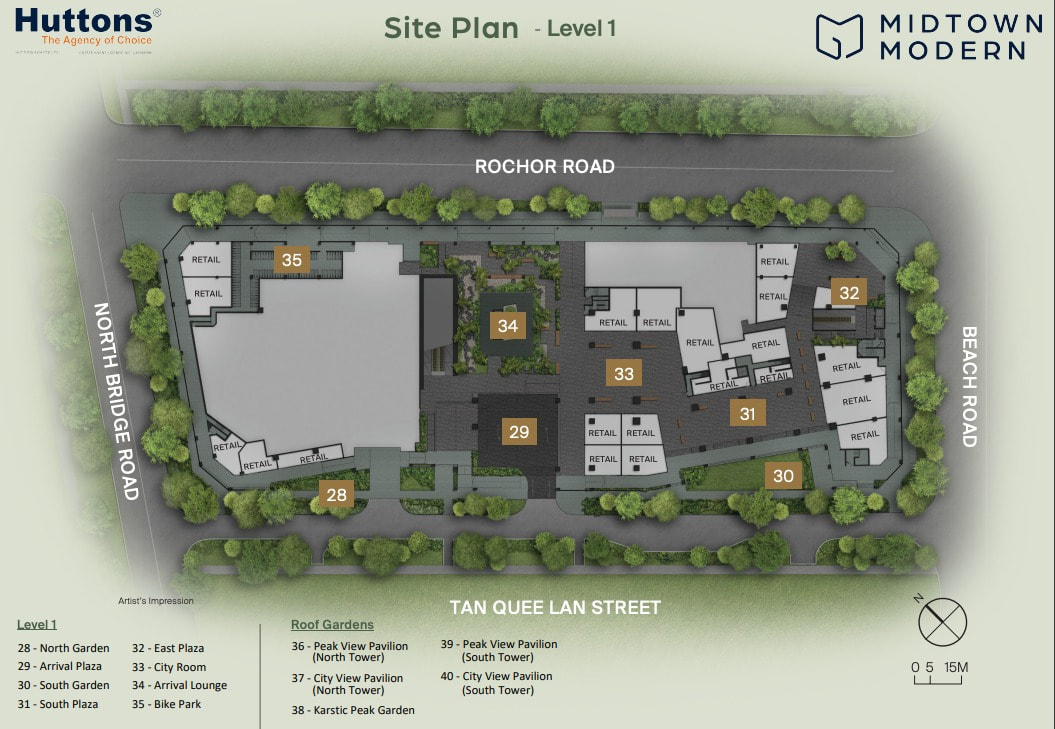 Distance between the unit and facilities (Refer to the site plan above)
Midtown Modern Details: 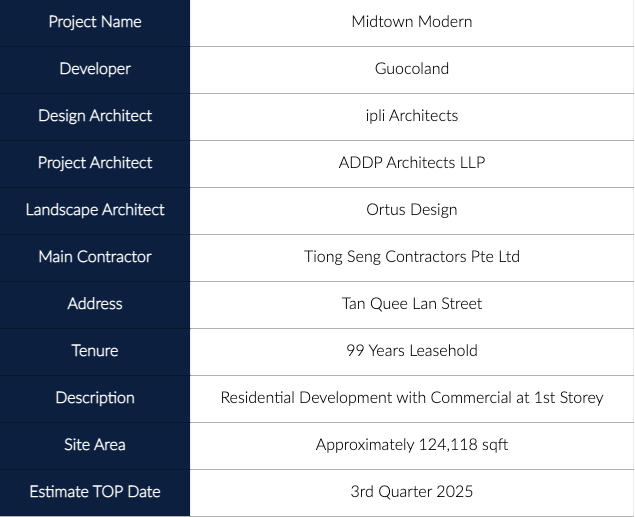 Midtown Modern offers 558 luxury garden homes, from 1 Bedroom to 4 Bedroom. Property investors and home seekers will be excited to hear that Midtown Modern will be very attractively priced during our VVIP Priority Booking as we will be offering special early bird discounts. Be sure to register your interest in order to secure your choice unit at our VVIP price. 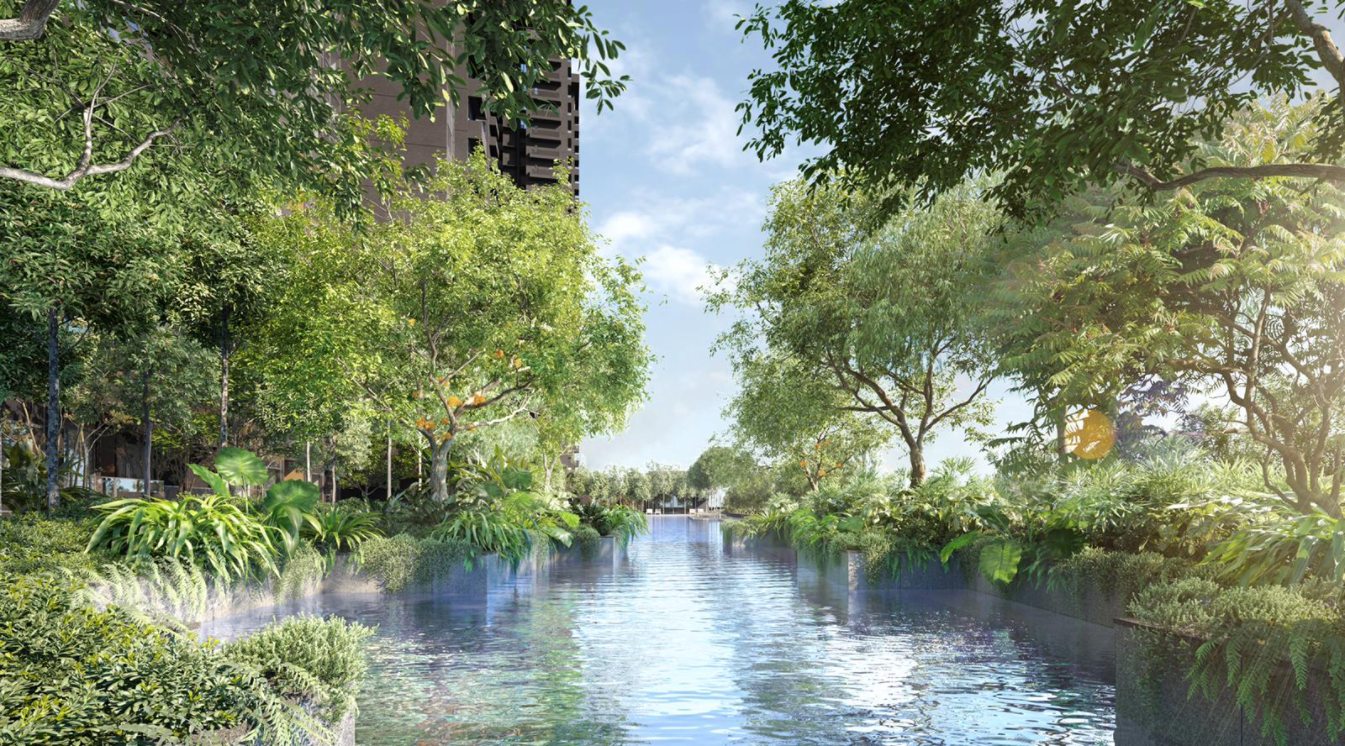 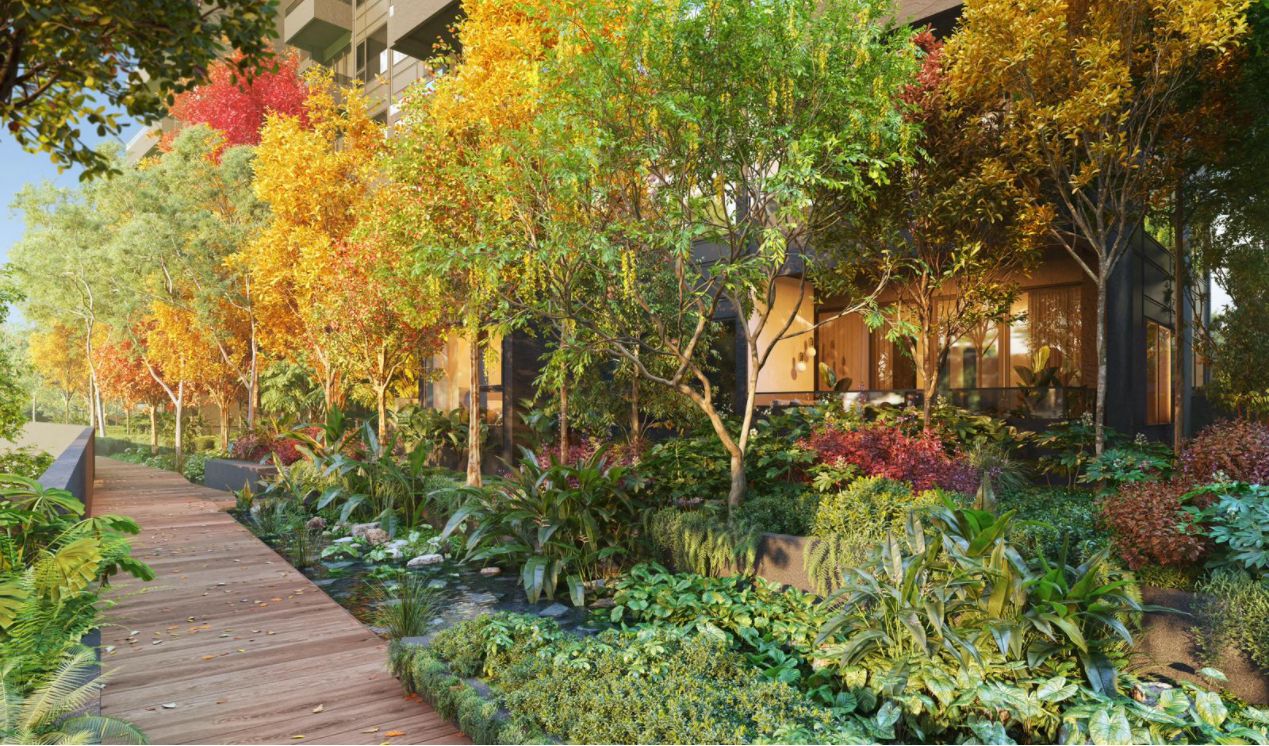 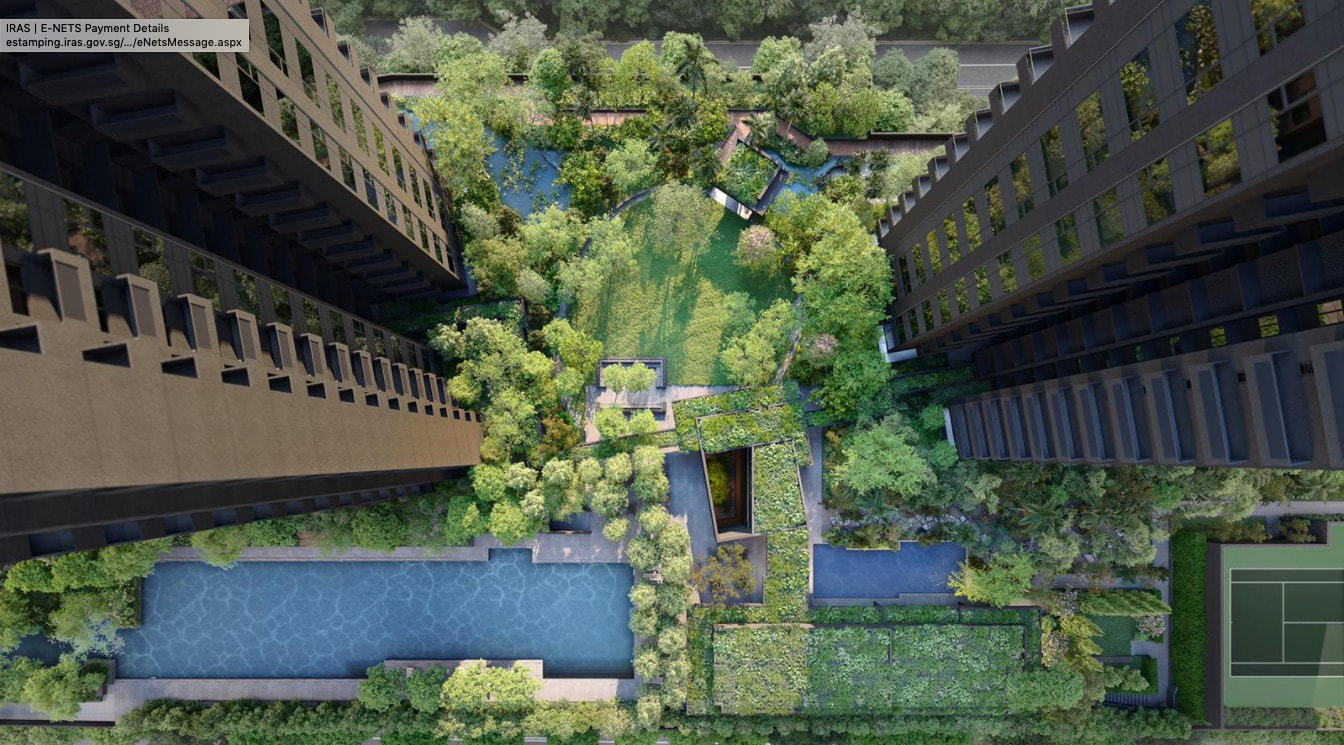 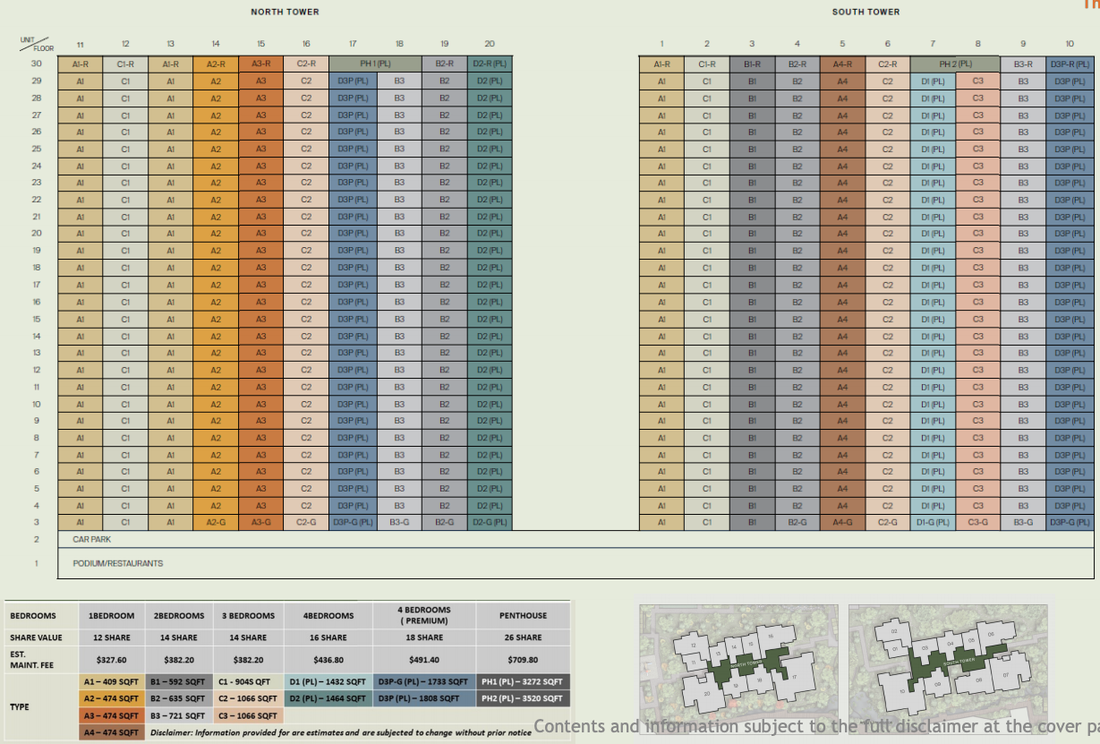 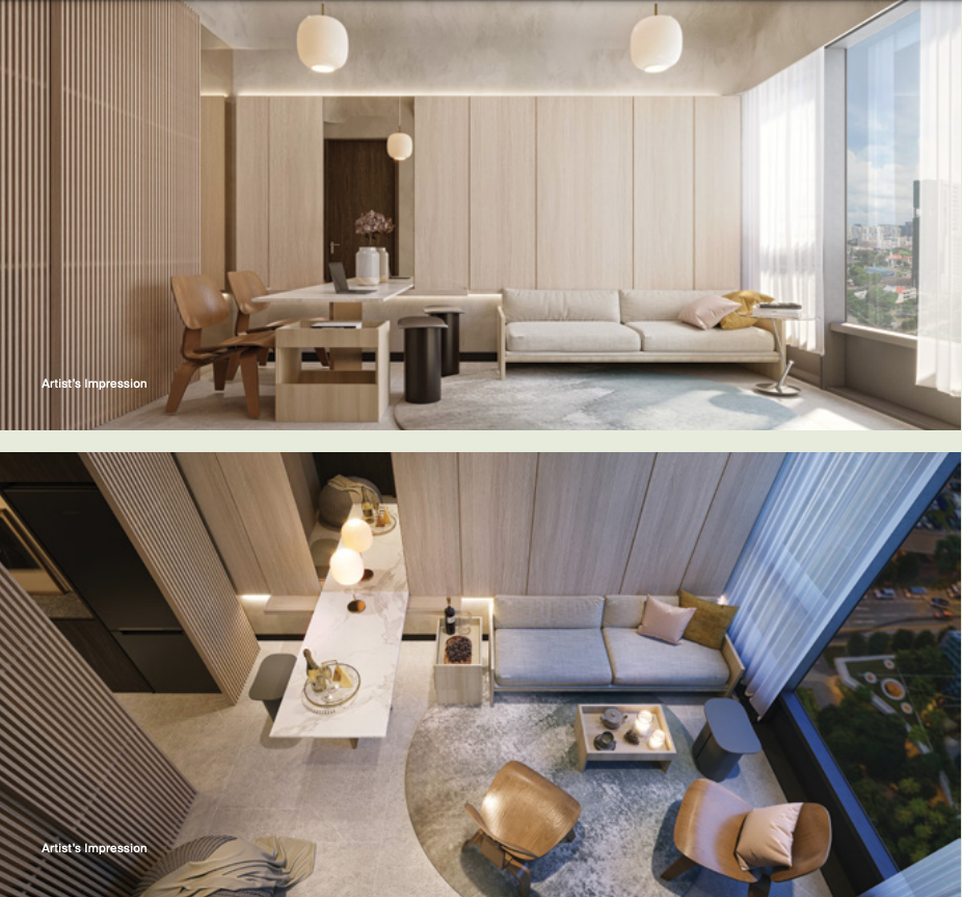 The interior spaces are designed with flexibility in mind. Life is simple when a 1-bedroom unit at Midtown Modern can be used for working from home in the day and as a space to entertain guests in the evening.
Midtown Modern Showflat Layouts 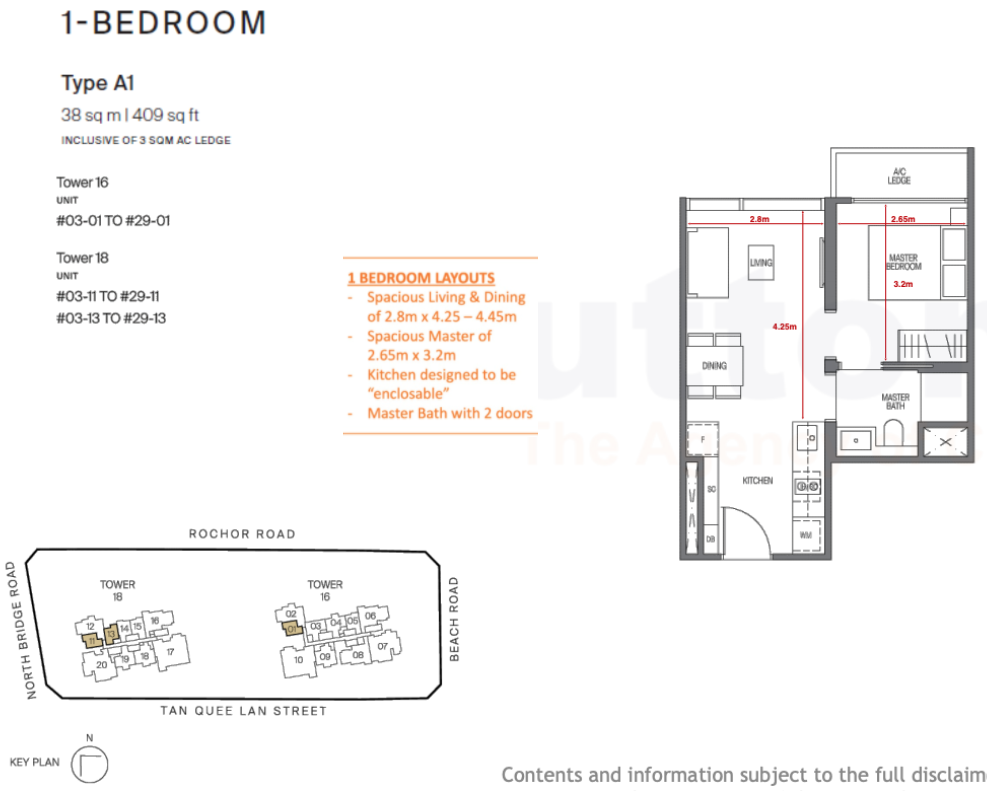 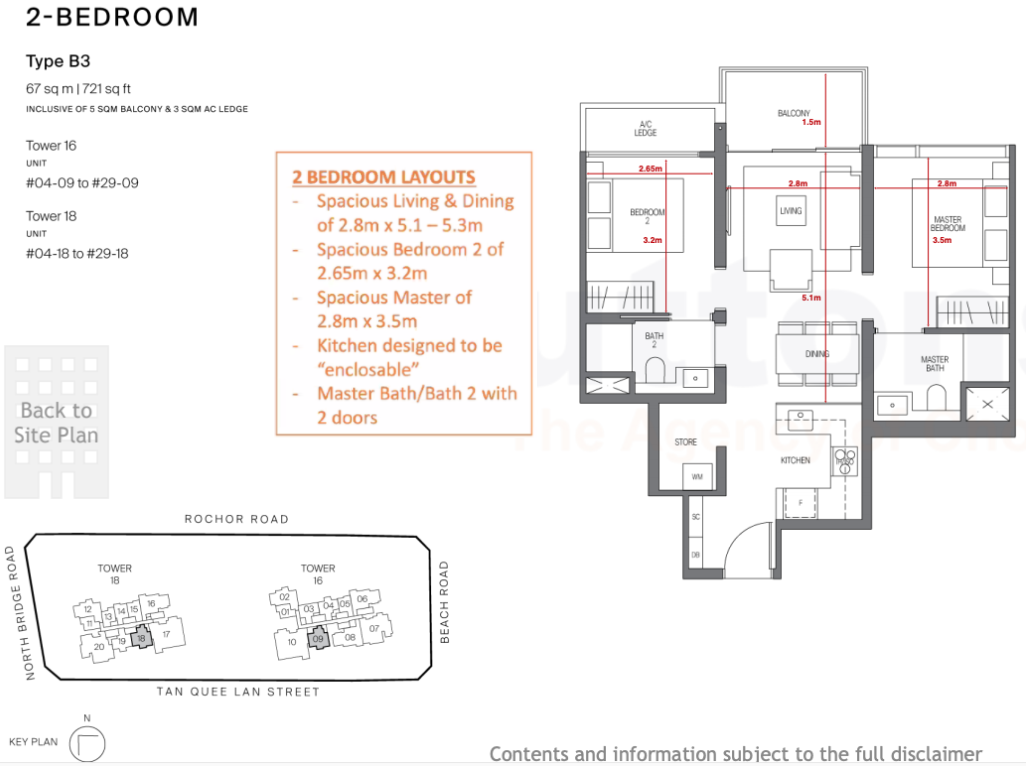 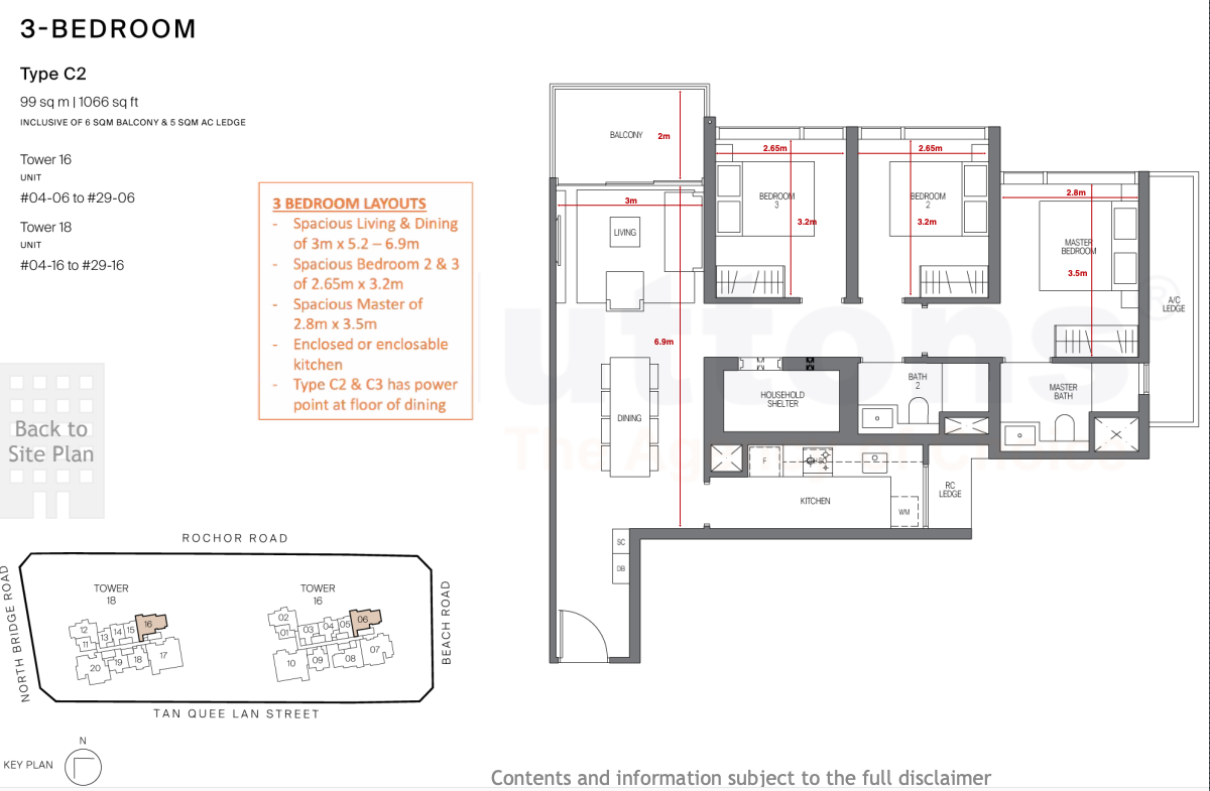 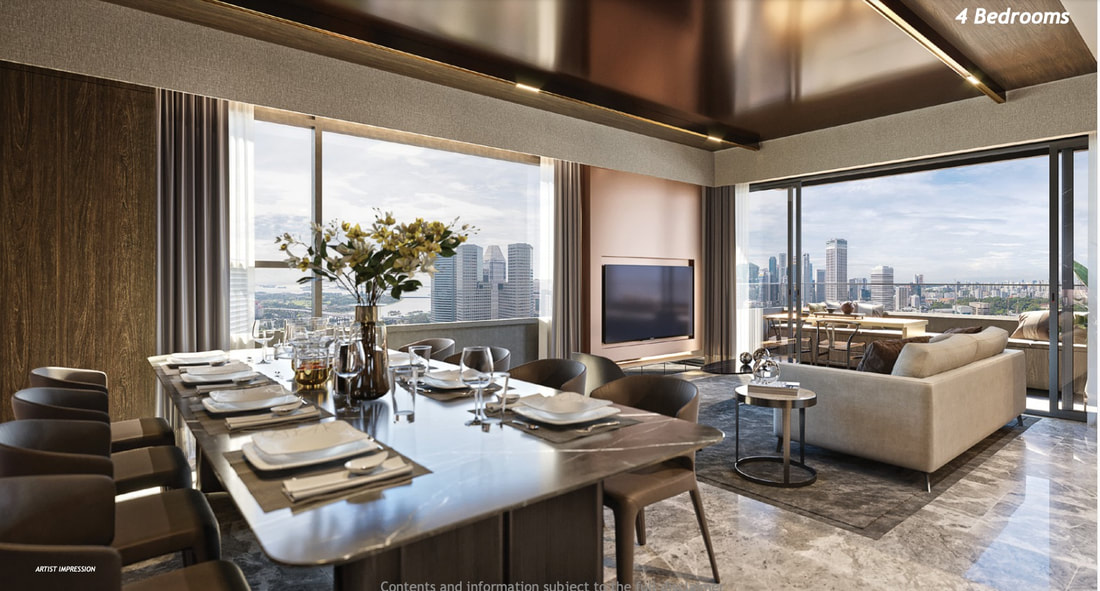 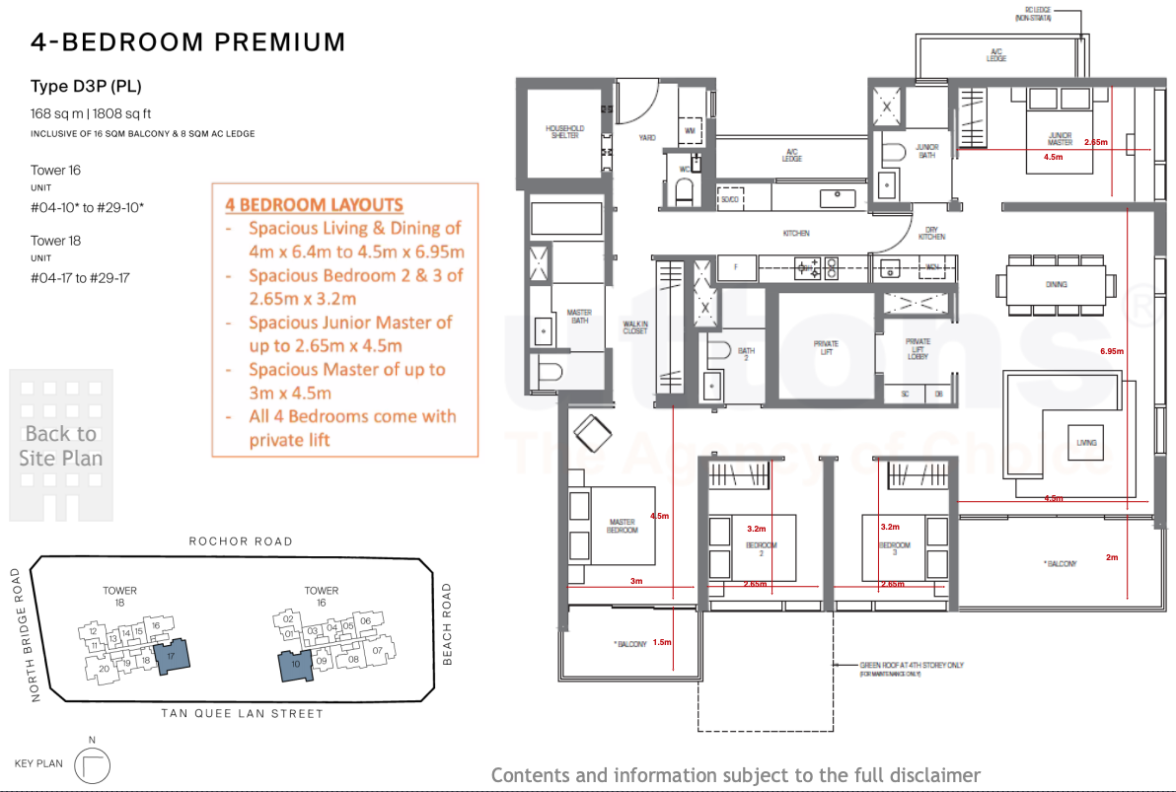 Welcome home to Midtown Modern. Within the warm brick tones of the twin residential towers, nestled in greenery and curated with resort-style facilities, 558 luxury garden homes are meticulously crafted for family living, with sustainability and flexibility in mind. Make your selection from a wide range of unit types and layouts, all generous, practical and extremely liveable.

WHY SHOULD YOU INVEST IN MIDTOWN MODERN?

Midtown Modern - aerial view of development at night
GuocoLand has already proven itself by revamping Guoco Tower, rejuvenating the district with 1.7 million sq ft of office, retail, hotel, luxury apartments and a landscaped urban park. After work hours, activity continues well into the night at dining establishments and the public square, connected directly to Tanjong Pagar MRT station. With its experience designing award-winning projects, GuocoLand will work the same magic on Midtown Modern. Residents are assured only the best.

Resale price trend comparison over the past 5 years

rental trend comparison over the past 5 years

About The Developer: Guocoland Group

Listed on the Singapore Exchange since 1978, GuocoLand Limited ("GuocoLand") is an award-winning real estate developer distinguished by quality, innovative design and concepts. In Singapore, the Group has successfully developed 36 residential projects yielding approximately 11,000 apartments and homes, and the iconic integrated mixed-use development Guoco Tower ― the tallest building in the city-state reaching a height of 290 metres. With established operations in Singapore, China, Malaysia and Vietnam, GuocoLand’s portfolio comprises residential, hospitality, commercial, retail and integrated developments spanning across the region. 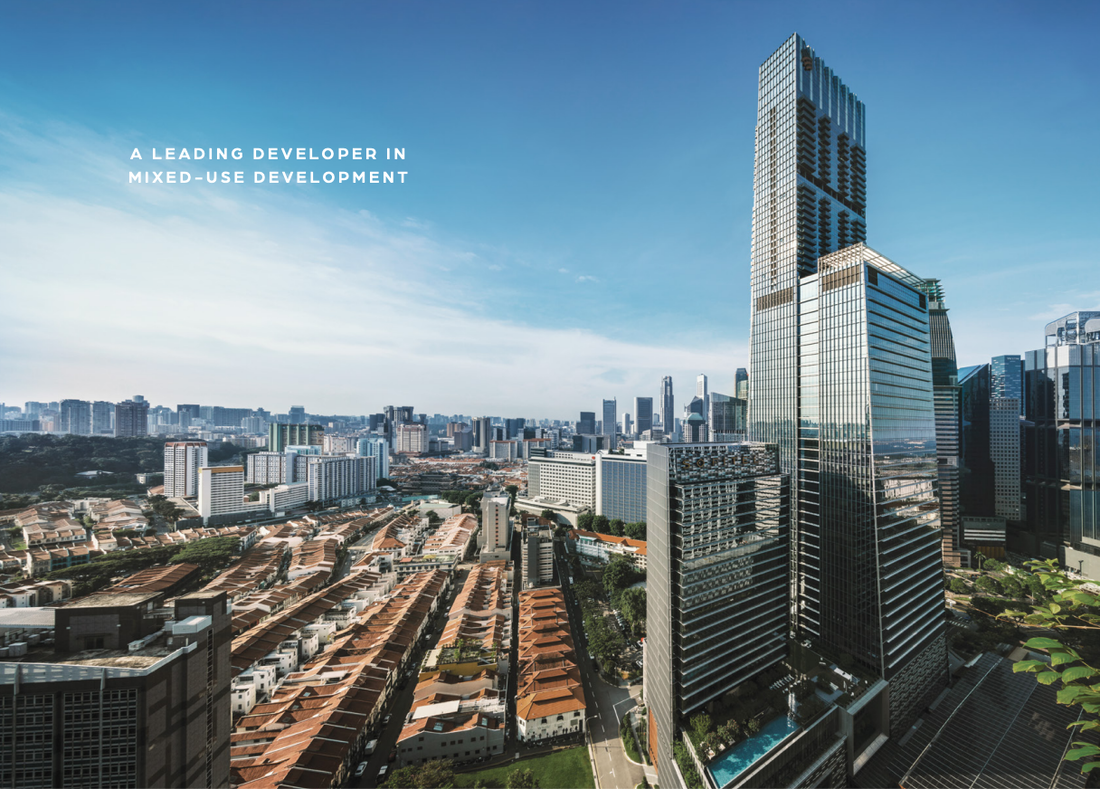 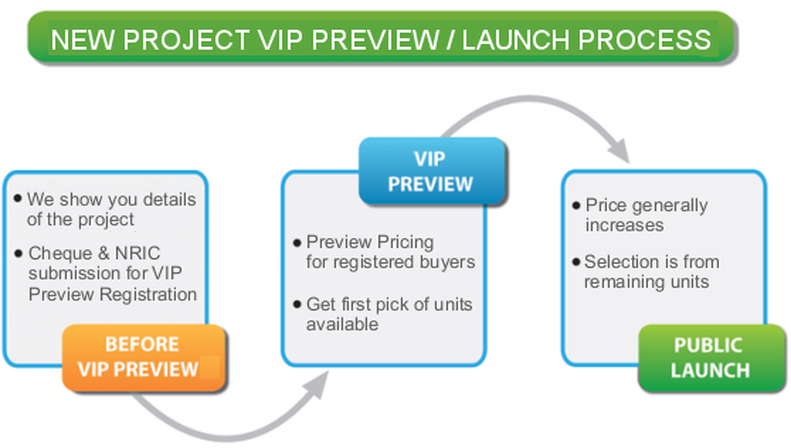 Copyright of Latest Project Launch Team © 2015
The Most Comprehensive Buyer's Guide List To All The Latest New Upcoming Condo Launches In Singapore Midtown Modern is a luxury residence by Guocoland, sitting right on top of Bugis MRT interchange